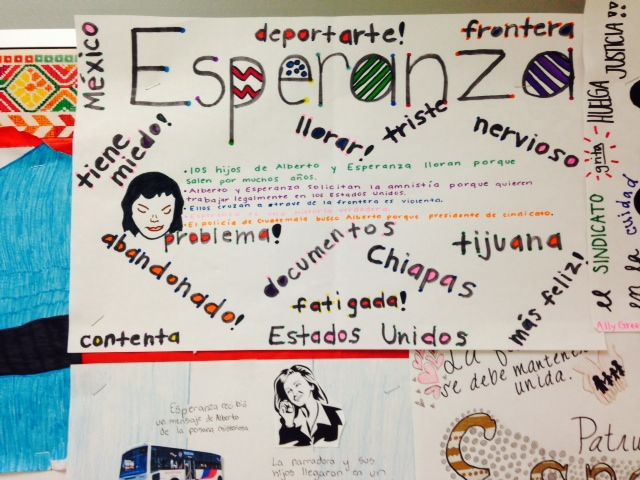 Although it may sound ridiculous, I am loving this novel more than ever! However, the point of this post is not to detail all of the things that I am doing the same as well as differently. Czrol, I am going to share, once again, a favorite song that I use with the novel and the updates that I have done darol it.

The song is Ave que emigra by Gaby Moreno from Guatemala. The previous three years the song was a hit with most of the students in my classes, but this year it became a guiding piece of pre-teaching as well as a continuing presence during the novel. Additionally, there is a new Gaby Moreno song out called Guatemorfosis that will provide a hopeful focus as we finish the novel. We started this gqab the very first day of our Guatemala study.

I literally used the lyrics that Gaby Moreno gzab in the song to create the story, incorporating some of them directly into the story. The results were wonderful. I spent 2 days with the story prior to introducing the song. The first activity with the actual song is to watch about a minute 10 seconds of the video, just checking what they see. We briefly talk about the images that they have seen. We then listen to the first part of the song, putting the first 7 lines in order.

After that, we talked about what those lyrics meant. The students knew exactly what the lyrics were saying esperamza of the story that we had read. Students answered some basic questions about the singer and the song, completed a simple cloze, worked with synonyms and antonyms, and did a personal reflection about what they thought the title of the song meant and what it might mean in terms of the novel that were going to be reading.

We also did a partner ordering of the song lyrics on another day, using big sentence strips on cardstock. An additional homework assignment was to illustrate their choice of three lines of the song.

I was so excited this summer to discover that Gaby, as part of a Pepsi campaign in Guatemala, had released a new song. There is an entire site devoted to Guatemorfosis: El cambio YosoyGuatemoforsiswith many stories from people in Guatemala who gab creating change for the country. The song is a HUGE hit in my classes. 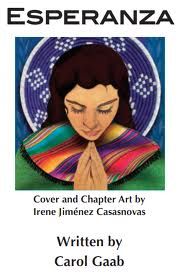 caeol The kids love the music and her voice. It is a really catchy tune! I have not yet worked with the lyrics with the classes yet since I want to keep this as an end activity when they know that the family has made it to the United States. I will use the song to bring the focus to present day Guatemala and the hopeful state of mind that is beginning to emerge after the decades of Civil War and the troubling years after that.

One activity that I caro I will use caril the students have learned the lyrics will be this matching activity guatemoforsis-through-images. I will run off sets of the pictures for groups of two. They will be cut and placed in a baggie.

I will play the song and the students will arrange the pictures to go with the lyrics of the song. The song is so new that the lyrics are not available on line yet, so here they are, to the best of my ability which means there may be errors!

I have written so many times about music and my teaching. I literally have been using music in my classes for the past 37 years! This post is going to be a bit different. Robo en la nochethe novel, written by Kristy Placido. Bianca Nieves y los siete toritosthe novel, written by Carrie Toth. Vida y Muerte en la Mara Salvatrucha 13the novel, anonymous.

Jacobs, Cristina Zimmerman and Zachary Jones. So many people have been acknowledging the tremendous benefits and relevance of teaching with novels and CI, that there is no need for me to say more…. I can not emphasize enough the phenomenal value of the TPRS novels and the novels being selfpublished Mike Peto as well as the original stories by people like Martina Bex.

Last year, both the majority of my students and I loved this book and I wrote two posts about some of the things that we did: Esperanza y Gaby Moreno and Esperanza…. However, this year I am even more pleased with what we have done so far…. Yes, it has taken me twice as long to cover the same material this year that I had covered last year at this point in time. I know now that I did not do justice to the novel last year, nor to the great ideas in the teachers guide.

We make a pretty good team, if I do say so! Between the two of us, we have students in 5 sections of Spanish III, and we really try to plan and create together. This year, we took many days to explore Guatemala: We decided to really focus on La Guerra Civil before we began the actual book.

So far, it has really paid off. We have read, viewed, talked and used manipulatives to really understand the background of the book. Here are some of the things that we have used:. Enlos sindicatos empezaron a luchar por una vida mejor y los derechos de los mayas y los trabajadores. Some of the things in the file are:. Another game, called Game Gritalo facts about civil warwhere the class is divided into 2 teams.

Each team receives an identical set of cards answers to the questions I will ask. Each person receives at least one card. I read the question or fact, and they had to recognize the answer, stand up and shout it! Noisy but a lot of fun. Additionally, we have spent significant time talking about public transport, bus drivers and strikes. Martina Bex has a useful product for the chicken bus in Guatemala and we used one of the readings from it.

It was a very rich discussion in Spanish. We referenced articles that are relatively current that deal with continuing bus issues in Guatemala, such as this on e. We used several videos: Just a bit of this one:. And finally, we have talked extensively about the crying of the baby due to hunger, the whining of Ricardito due to hunger, and their vomiting.

We have discussed hunger and vomiting due to crying and hunger quite a bit. We have talked about tortillas, bread and the staples of life for different cultures. Would they eat just plain tortillas?

I hope these ideas may be beneficial to those of you who are also teaching with Esperanza. It has been a whirlwind of a fall! It is difficult, on one hand, to believe that I have not been able to blog since August. On the other hand, it seems like August was just last week!

I can say one thing unequivocally…enhancing CI with novels written specifically for that purpose is probably the best thing that I have ever done in my teaching career with the exception of leaving the textbook behind, and always incorporating music. With this post, I am only going to address Esperanza. However, it took longer because they enjoyed it so much!!

There was just so much to do with the story and all of the possibilities that emerged as we went along! You can see my entire 7 weeks of lesson plans here. I owe so much to the phenomenal Martina Bex, as it was her lessons that initially guided my planning, and I continued to refer to her during the entire journey.

PBT Esperanza Choose one of the following options to complete as your formal assessment. Pay close attention to the description, many of them contain multiple parts. Work turned in late will be accepted, but for reduced credit. Choose two characters from the book. With another person, role play a scene from the book featuring these two characters. You must create your own script. You cannot use the dialogue in the book. The script must contain at least 10 lines per character.

The dialogue will be performed in class, and a copy of the script will be turned in. Retell a part of the book from the point of view of Ricardito, Beto or Lucy. You must use at least 20 sentences. Draw at least 3 full size comic strips that highlight three important events in the book.

Make sure the dialogue is realistic for the characters and does NOT come from the book. Create a graffiti drawing or mural about the book. The drawing should illustrate the MAIN events in the book.

Design a poster advertising the book, include at least 5 interesting details about the book that would make others want to read it. Create caarol lyrics and music to tell the story of the book. Use the book title as the song title.